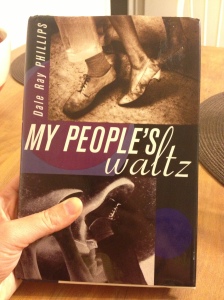 Such waltzing was not easy.”

The waltzing boy in Roethke’s poem could easily be Phillips’ Richard.  In ten short stories, Richard narrates the story of his life from his (chosen) mute boyhood in a tumultuous home to the (reluctant) home birth of his first child to the (slow) decline of his parents.  Through every major life event, the characters waltz together: literally, when it seems the only option, and figuratively, as they hang on for their lives.

“My grandfather kept his floozy in a silver Airstream above the bend in the river where the dead crossed over,” begins Richard in the first story, “Why I’m Talking.” This story sets the tone with similarly rhythmic language and a humidity-soaked river setting.  Eight years old, Richard spends the summer not talking and simply observing his grandfather, a retired judge; his grandfather’s black mistress, Miss Minnie; her illegitimate daughter, Sudie; and Sudie’s lover, Willie Reese.  Richard chooses not to talk because “whatever had abducted my mother might steal me if I let out too many words.”  Richard’s mother is interned in a mental institution after attempted suicide, and his father is working as a traveling salesman.  So, the temporarily mute boy tries to make sense of these relationships and suppress his suspicion “that love had gotten us into all of this.”

Here, it becomes clear that these are stories about love: real, messy, painful love.

A collection of short stories about “love” seems trite, but Phillips does not write stories of romance and heartbreak.  He writes stories in which love is a given, and the characters unwittingly do all they can to ruin it.  Richard’s parents fumble and fail at marriage; his first stab at sex is with a drunk Dutch woman who makes him tell her he loves her.  He ends his college engagement because “the greedy part of myself wanted more.”  He marries.  He plays horseshoes with a blind mid-wife while his wife goes into labor.  He divorces.  He sells non-existent beachside property and feels guilt over his distance from his son.  He goes camping with his father and his son and water-skies naked.  He and his ex-wife intermittently reunite.  He visits his hypochondriac mother during a snowstorm.  Richard relishes his choices and ultimately regrets them.

I first read My People’s Waltz when I was feeling a bit disenchanted with literature.  Two years through a three year graduate program, a writing program, I had become tired of reading.  I had become tired of novelty in contemporary fiction: odd points of view and narrative conceits that seemed written only for their differentness, that seemed to exist only to flaunt their own cleverness.  (Not to say that novelty in any element of storytelling is inherently bad; I love when a writer can do something genuinely new that also tells a brilliant story.  I was tired and bitter at the time.)  Phillips does not play with voice or tense or reality.  He sticks to first person, past-tense.  The stories take place in North Carolina, Arkansas, and Texas.  The success of the stories is in the realness of these people, and the language Phillips uses to describe them.  Richard’s people, “a stock of people who dance in their kitchens” are not always likable, but they display real human emotion.  And Phillips nails it every time.  His lines border on sentimental, but somehow it seems right. He describes the dancing in the titular story:

“Any event which time can’t accommodate–a premonition of death, the sudden realization I am loved, the hardy backslapping and hopeful hoisting of glasses at weddings, and especially the soft, early morning sounds certain women voice when surprised with a hungry kiss behind the air–these moments move like ancestors through my musculature and set my feet to motion.”

There’s something about Richard, perhaps it’s his nostalgia, perhaps it’s his desperation (His mother eventually puts it to him: “This last stand stuff you men learn—where you make some desperate claim on someone’s feelings—who teaches you that crap?”) that keeps you reading.  In every story, a part of me hoped for an ending where the conflict was resolved, and they lived happily ever after. But Phillips always chooses meditation over resolution.  And isn’t that the way it goes?  Don’t we all continuously make mistakes, and in the end, ruminate on and surrender to them as the mistakes that make us up?  In “Corporal Love,” Richard camps with his wife and son.  Though Richard and Lisa are divorcing, the three lay together in the tent.  He knows this moment is fleeting, so he lingers, “adoring them, in love with these people, and the grace of this borrowed moment, and the imperfection of things which pass.”  This is why I love this collection.  These people, who are so fundamentally flawed, love each other so damn much.  Their love conquers nothing, it only propels them forward.

7 thoughts on “My People’s Waltz by Dale Ray Phillips”

What do you think? Share your thoughts. Cancel reply